Aston Villa arrived at the Hawthorns this evening to face off against West Bromwich Albion for the second time in three days, with a one goal advantage after beating them 2-1 in the Play-Off Semi-Final First Leg.

Aston Villa started the game off well, with El Ghazi creating a chance from a Craig Dawson mistake and winning an early corner.

Both sides shared the possession throughout the first fifteen minutes, in a game that started pretty heated, as expected.

Tyrone Mings was booked in the fifteenth minute for a silly hand-ball attempt as he went to head a corner towards goal.

It was West Brom, however, who took the lead in the tie. A long throw from Mason Holgate wasn’t dealt with well by Aston Villa and Craig Dawson got their first, sneaking a header between Tammy Abraham and Ahmed Elmohamady and into the far corner of the net.

From here, both teams really struggled to get an attacking foothold on the game. Aston Villa enjoyed the vast majority of possession, but West Bromwich Albion were doing a fine job of stopping the visitors from playing football.

El Ghazi fired a speculative shot at the West Brom goal in the 42nd minute, but former Villa ‘keeper Sam Johnstone had his near post covered well.

At this point in the game, Villa had enjoyed 65% of the possession.

Aston Villa started the second half positively, much like the first, and won a corner within the first two minutes.

The first few minutes after this corner were worrisome, with Tammy Abraham looking to have re-aggravated his shoulder after a collision with Bartley, and mistakes a plenty  – with one from John McGinn and another from Jed Steer – who was saved from a poor pass by Tyrone Mings.

The entire Aston Villa midfield looked nervous, and this wasn’t helped by a number of poor passes.

As the sixty minute mark came, and West Bromwich Albion set up for a corner, changes needed to come. But they didn’t.

Villa’s first real chance of the second half came in the 68th minute, as Anwar El Ghazi forced a save from Sam Johnstone.

In the 75th minute, Albert Adomah replaced Andre Green for Aston Villa, and Matt Phillips was replaced by Rakeem Harper.

In the 80th minute, West Bromwich Albion were down to ten men after he received his second yellow for another foul committed by him on John McGinn. Shortly after, Jacob Murphy was replaced by Tosin Adarabioyo for the Baggies.

Albert Adomah came agonisingly close to scoring in the 88th minute as he fired directly at Sam Johnstone who did incredibly well to get down to his right to make a spectacular save. 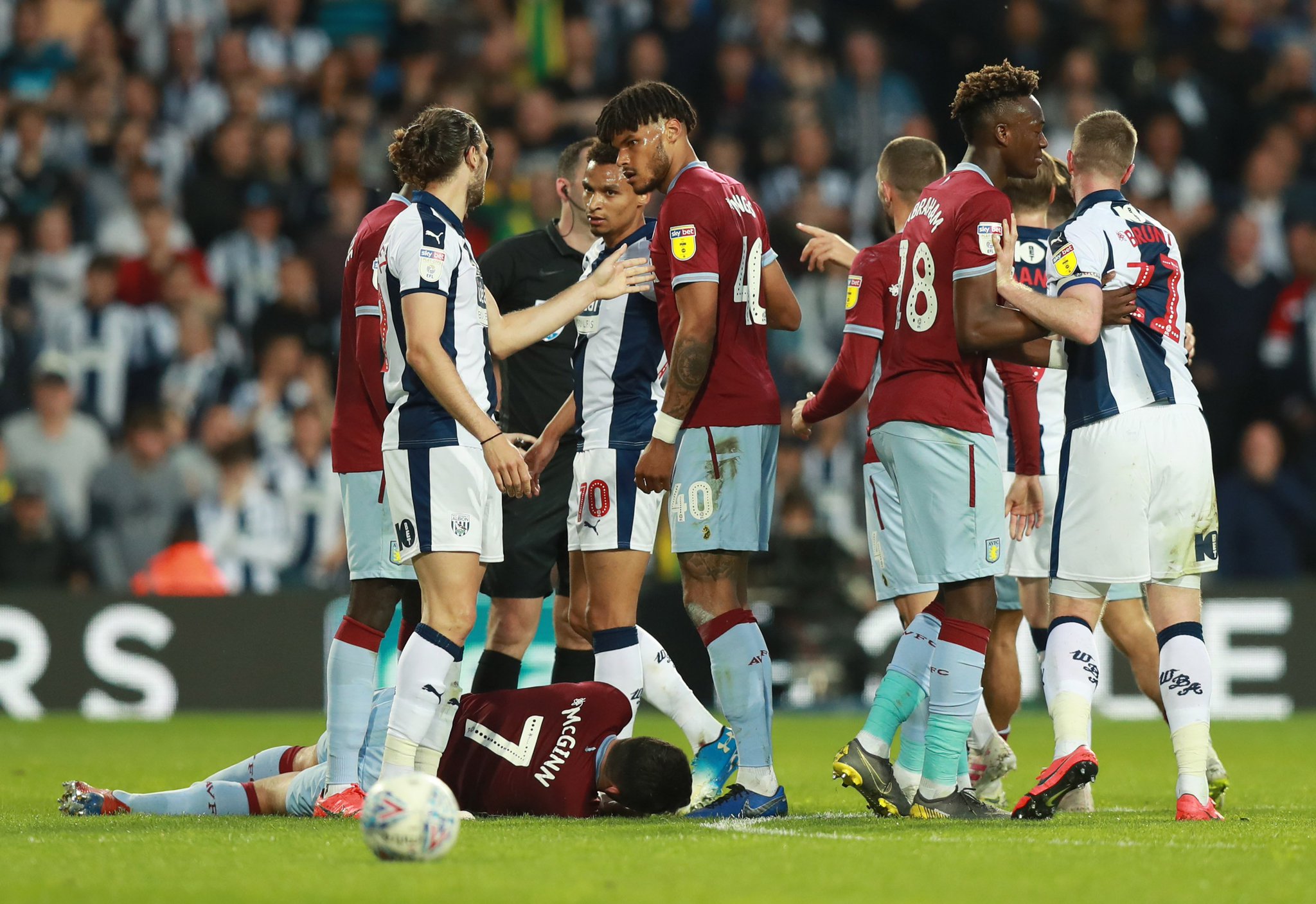 The game went to extra-time, and the nail biting began for the Villa faithful. Within the first two minutes of extra-time, the Baggies bought Jay Rodriguez off and replaced him with youngster Jonathan Leko.

Jonathan Kodjia arrived into the fray in the 10th minute of extra-time, with Anwar El Ghazi being replaced.

Aston Villa enjoyed just under 90% of the possession in the first half of extra-time, but just couldn’t do anything with it.

In the second half of extra-time, Aston Villa continued their domination, but still continued to not be able to break down the Albion defence.

In the 23rd minute of extra-time, right-back Elmohamady was replaced by young forward Keinan Davis – with every opportunity to write his name into Aston Villa folklore.

Davis had a chance in the 27th as he beat his team-mate Tammy Abraham to the ball but failed to make decent enough contact with the ball to truly challenge Sam Johnstone.

And then, it went to penalties.

Ahmed Hegazi stepped up to take the Baggies second, and Jed Steer saved it!

Mile Jedinak stepped up for Aston Villa’s second, and scored.

Tosin Adarabioyo stepped up for the Baggies third, and scored past Jed Steer.

Jack Grealish stepped up for Villa’s third, the Captain for Villa, and scored.

Gibbs stepped up for the Baggies fourth, and scored.

Adomah stepped up for Villa’s fourth, and skied it.

James Morrison scored past Jed Steer, just, for Baggies fifth penalty, making the scores 3-3 with Villa with one left to score. And Tammy scored it.