As the Ladies season has drawn to a close, we’ve reviewed what has been a spectacular season for the side.

The Aston Villa Ladies had a spellbinding season which saw them finish in 6th in the FA Women’s Championship Table, making an improvement of around fifteen points on their previous attempt in the league.

Overall, there has been a feel good factor around the club and this is in no short part to all of those involves – the homegrown talents, the new arrivals last summer, and the coaching team lead by manager Gemma Davies.

We’re going to review the campaign that brought so many fond memories of the season just passed, and filled fans with excitement for the next year in the Championship.

At a glance, it was a great season for the squad.

They finished in 6th position, a three place improvement on the 2017/18 season, and amassed fifteen points more (although there were two more matches this season).

Jodie Hutton finished the season as the Ladies’ top scorer, amassing 11 goals as a winger and bursting onto the scene at the club. 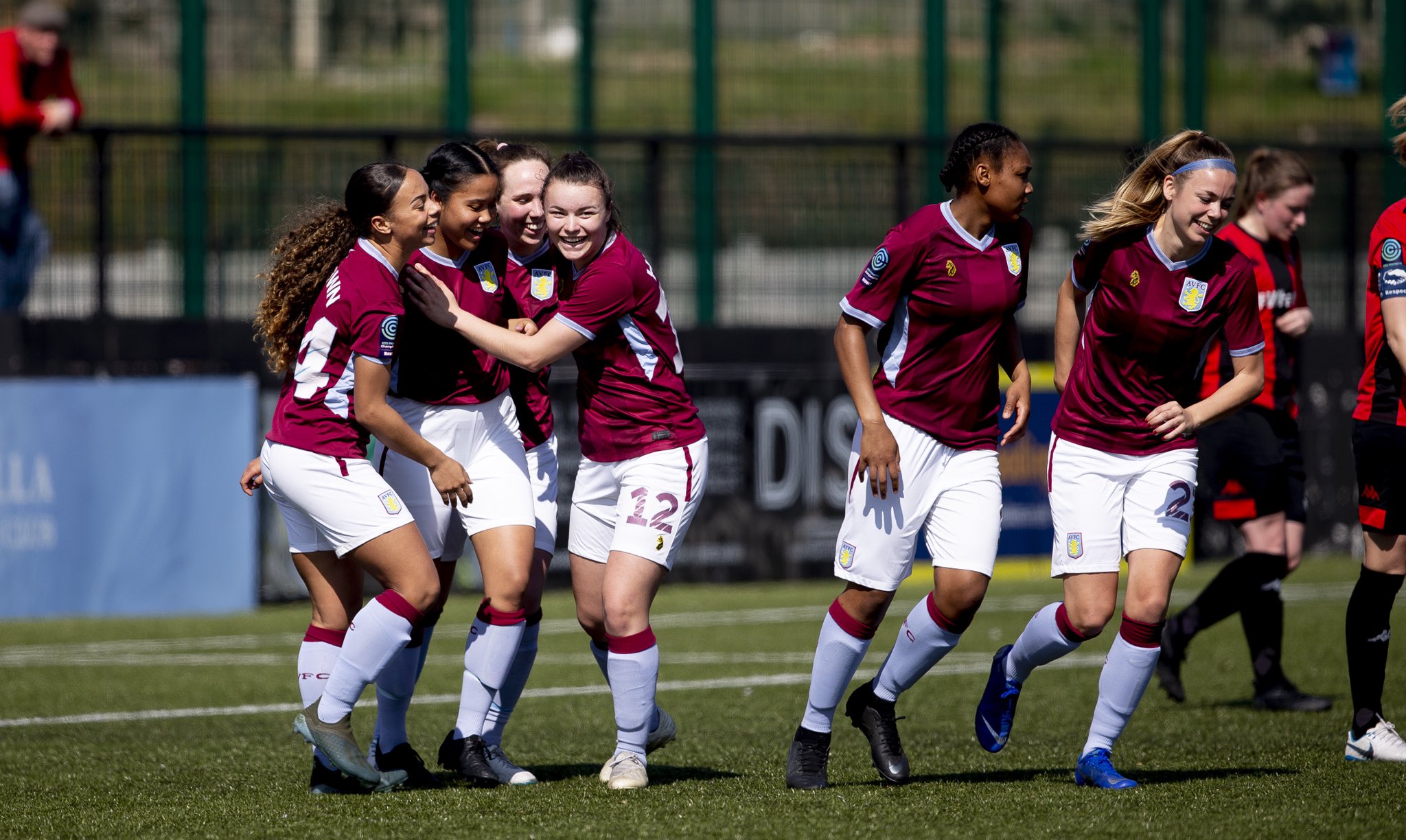 The Aston Villa Ladies were welcomed to their new home of Boldmere St Michaels with a 12-0 drubbing on the opening day of the FA Women’s Championship season at the hands of fully professional side Manchester United Women. Whilst you might not consider this a key game due to the heavy loss, it set the tone for the Ladies and put a fire in many a belly – partly because of the social media reaction and partly because the Ladies’ knew they could do better.

The girls were in topsy-turvy form until they met Sheffield United Women for the third time of the season, and drubbed the side 5-1 – after losing 4-1 the last time they had met. A hat-trick from Jodie Hutton, and goals from Sophie Haywood and Tanisha Smith ensured it was a true rout for Aston Villa Ladies on home soil.

Unfortunately, another of the key games also comes against Sheffield United once more. This time in the fifth round of the SSE Women’s FA Cup – where the Aston Villa Ladies looked down and out before an incredible comeback saw the side progress through to the quarter-finals.

The second time Aston Villa Ladies met Manchester United, this time away, they lost once more. But this time showed incredible heart to only concede five goals, especially as goalkeeper Sian Rogers was shown a red card. This result, away from home, showed how far the Ladies had truly come.

Finally, the penultimate game of the season against Tottenham Hotspur, who were promoted to the Women’s Super League via a 1-1 draw at Boldmere. To draw against the second best side in the League, and the best non-professional side in the league was a massive feat.

Player of the Season

They’ve all been outstanding this season, but could it really be anyone other than Jodie Hutton?

The youngster burst onto the scene this season, scoring an impressive 11 goals from a winger’s position, and earning herself a professional contract, the first player at the club to do so – and potentially paved the way for a number of her team-mates to do the same.

Hutton had to deal with personal issues off the pitch, but handled them with a grace and maturity that many other teenagers wouldn’t, and instead channelled it into her performances and continued to go from strength to strength.

Her performances have earned her multiple call-ups to the Women’s England International set-up throughout the season, and we could be seeing her playing for the Lionesses in the near future.

Signing of the Season

For us personally, this would have to be Nadine Hanssen.

The Dutch midfielder, who has previously plied her trade in both the Netherlands and Belgium added a dynamic to the squad that truly echoed what the coaching staff were trying to achieve this season, and also proved to add a bit of European flair to the squad.

With Nadine, amongst others joining last summer, we’re excited to see any transfer business for the squad this summer.

An Ethos for the Entire Club

With the introduction of Dean Smith as manager of the men’s team this season, a local lad with affinities to the club since he was a boy, it was interesting to see that the Ladies had done something similar with their new coaching appointment, although much earlier into their respective season, with Gemma Davies.

Joining the club at the age of 25, she had been coaching since the age of fifteen where she started at the Erdington Ladies football club – which saw her progress and bag herself a UEFA A Coaching Licence as well as previous coaching roles for Birmingham City Women, Derby County Ladies and Coventry United Ladies – the latter of whom will be joining Aston Villa Ladies in the Women’s Championship next season.

Whilst managing the Ladies side, Gemma is also the Head of Women’s Football at the University of Birmingham.

Personal sacrifices, a true coaching ethos and a local thirst for success have proven to be a great choice for the team this season.

As the summer approaches, we’re sure that we’ll see some transfer activity around the club, and this might mean that some of our talented players leave, but ample replacements should follow.

We’re hoping that in the summer, or next season, we’ll see more of our girls rewarded with professional contracts, because god knows that they deserve them.

The FA Women’s Championship has been made a little easier with the promotion of Manchester United and Tottenham Hotspur Women to the FA Women’s Super League, and administration-strapped Yeovil Town Ladies have dropped down in their place. Coventry United Ladies also join Villa in the Championship. This will allow for a much wider league in terms of competition, and could benefit our club.

As long as we keep the core of our squad, there’s no reason we can’t improve on what we achieved this season.

Encouraging signs for Aston Villa Women despite crashing out of cup